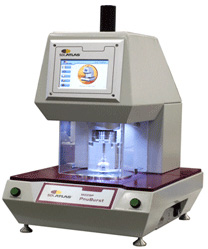 M229P PnuBurst Bursting Strength Tester
The SDL Atlas M229P PnuBurst™ determines the bursting strength and distension at burst of woven, knitted and non-woven fabrics, paper and paperboard. The PnuBurst employs a precision pneumatic system. The bursting pressure is applied to a circular specimen and distends it to its point of rupture. The measurement of bursting strength is expressed in kilopascals (kPa), bar, and psi. The maximum pneumatic pressure (depending on compressed air supply) is 1500 kPa, 15 bar or 200 psi.

The PnuBurst uses a rubber diaphragm under pressure to extend the fabric specimen. The built-in pressure chamber with pressure sensor is controlled by the color touch screen LCD panel and delivers the bursting pressure under the rubber diaphragm and the specimen which is laid over the diaphragm. Burst distention is measured by the LVDT sensor which is built inside the clamping bell. When the specimen has reached its burst strength limit, it will burst, and the pressure under the diaphragm and the height it reached at this point are accurately recorded. The diaphragm automatically returns to the zero position. There is also a certain amount of pressure resistance due to the diaphragm itself, and this is accounted for during the diaphragm correction procedure. That is, the diaphragm without any fabric is extended to the mean height in the series of these burst tests and this “pressure correction” is automatically deducted to give the final “corrected result”.
more info...
Top